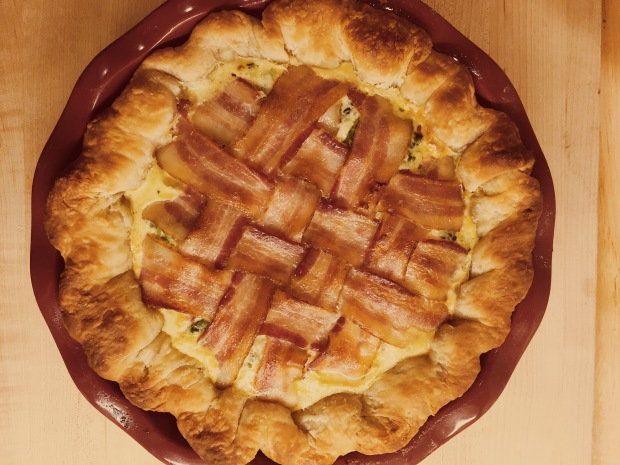 So sometimes feeding yourself consists of putting enough fuel in your body so that moving is still an option on the table. This generally means that there will be lots of coffee, and meal time is quick and to the point. Sometimes that means you eat frozen pizza twice in one week. Last week was kind of like that, we rotated between salad with grilled chicken one night then frozen pizza the next. And repeat.

Sunday was finally a day when I had enough energy/time to get in the kitchen and actually make some things happen that required more attention than dump and stir. And what happened was a spinach pie with a bacon lattice top.

I’m sure you’re thinking “whoa. over the top. chill out and get off Pinterest” because who in their right mind basket weaves bacon? What kind of crazy perfectionist takes the time to do that?
Me. I do that. Guilty. (hand raised)

This recipe was inspired by this quiche which I’ve made for a while now, tweaking in my own ways, adding halved cherry tomatoes or using whatever greens we might have that don’t include spinach. But quiches are nice, well behaved, thin crusted dishes that are served at wedding showers and lady teas. This is PIE. Its got a thick, buttery crust served in a deep dish pan topped with bacon. It’s hearty and filling and we had it for dinner last night and the night before and if there is any left it will be breakfast. It would make a superb weekend brunch, because you can always prep your pie crust and filling before hand and bake the next morning.

The over-the-top part here is the lattice: it looks fancy and will wow a crowd, but its really easy, and this techniquie works with regular pie crust or bacon:
You need 8 strips of bacon, or pie crust, about the same length and size, preferably long enough to cover the entire top part of your pie.
Lay 4 strips vertically on a level surface and number them (in your head) 1-4. Lift up strip # 1 and 3 and place strip # 5 horizontally, on top of strips 2 and 4, about 3/4 of the way up. Lay strips 1 and 3 back down. Next, lift up strips #2 and 4, place strip number 6 horizontally across strips 1 and 3, then fold back down strips 2 and 4. Repeat with the remaining 2 bacon strips. Hopefully this makes sense if you look at the picture below:

It’s important to half-way cook your bacon and allow some of the excess grease to drain off, otherwise you’d end up with a greasy pie. I baked my bacon on a cookie sheet lined with tin foil in a 360 degree F oven for 15 minutes, watching carefully so it didn’t over brown. Let it cool and drain, before lattice-ing and topping your pie. You can lattice before you bake, which is what I did, but that ended up being a transferring disaster, so it’s probably better to bake then assemble, just try not to tear your bacon.

If you want to do this before a party/brunch, roll out your pie crust and place it in you pie dish, then refrigerate until right before you bake. Mix your filling together, but don’t store in the crust overnight, it’ll make the dough soggy. Bake your bacon and set aside until ready to use.

about 3/4 of a pie crust recipe for a 9 inch pie pan (see recipe here), rolled out to about 1/4 inch thickness and placed in a deep pie plate. Allow for about 1 inch of crust overhand around the entire pie circumference.
1 pound of frozen spinach, thawed and drained
1 cup freshly shredded cheese, I used a mixture of sharp white cheddar and Parmesan.
4 ounces cream cheese, softened
4 large eggs
1/2 cup of whole milk
salt and pepper to taste, I used about 1/2 teaspoon each.
8 slices of bacon, see above for instructions.

Preheat oven to 440 degrees F.
Whisk the cream cheese in a large bowl until smooth. Whisk in the milk, then the eggs one at a time. Stir together remaining filling ingredients and put in prepared pie crust. Carefully place bacon on top of crust, either pre-latticed or put together on top of your filled pie shell. The edges of the bacon should touch the edges of the pie. Roll up your crust overhang and pinch the bacon into the crust, and crimp the edges with a fork or your fingers. Bake in preheated oven and check at 20 minutes for brown-ness. If needed, remove pie and place tin foil on top to prevent over browning, and bake for another 15-20 minutes. Pie is done when crust is well-browned and filling is set (firm). Let cool for at least 15 minutes before serving.